Russian born Sokol had a bright future as a hockey player, a grinder for the STP Bombers. However, this was a front. Between matches, Sokol was a robber of casinos, and left a trail of emptied vaults from Moscow to Minsk. Eventually, the Russian police closed in. Sokol evaded them but knew his time as an independent heister was drawing to an end. 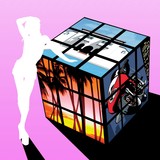 I love the look of this gun! Can you please make another version with a box magazine, replacing the semi-automatic shotgun?

Man, I love your weapons! Add a SCAR-L to the game! Please! Thanks!